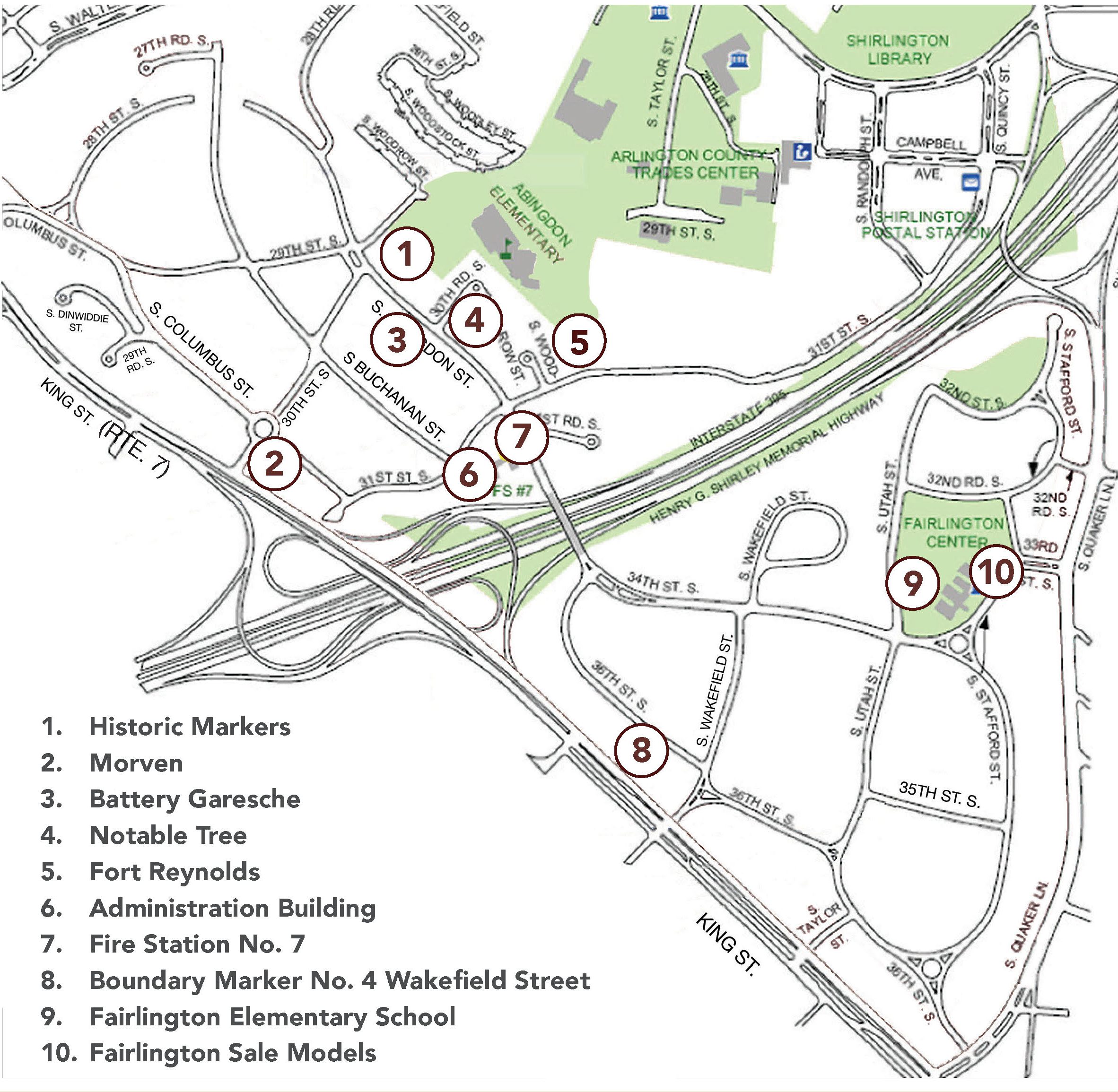 “Following historic designation, the Historical Society designed and installed a variety of historic markers throughout Fairlington. In addition to the combined National Register and Virginia Landmarks plaque installed on South Abingdon Street between Fairlington Villages office and the Community Center, oval plaques were placed on the brick entrance walls.” (p. 95)

2. Morven
ln 1756 Colonel John Carlyle, a friend of George Washington, held the title to the land now known as Fairlington. “Sometime before 1770, Carlyle began building a plantation on this land – at 30th and South Columbus Streets, North Fairlington – naming it Torthorwald after one of hi;s family’s Scottish properties. Because some people began calling it Totherworld; the name was changed to the shorter, easierto- pronounce Morven.” (p.4)

3. Battery Garesche
“Nearby was the 166-yard perimeter Battery Garesche, a small redoubt with seven guns, named in honor of Colonel Julius S. Garesche: … Battery Garesche was dismantled after the war, possibly when Virginia was readmitted to the Union(1870).” (p.91)

4. Notable Tree
In the Spring of 2015 the large white oak tree at 3059 S. Abingdon Street was recognized as a Notable Tree by Arlington County. The selection criteria include size and/or age, species, historical interest or significance the community. The age of this tree is unknown but some think it dates to the Civil War.

5. Fort Reynolds
“The building of the defenses of Washington began in 1861 and resulted in 22 forts in present-day Arlington County alone: one in North Fairlington and one near it. Fort Reynolds, first called Fort Blenker after the German major general whose emigrant division built it, was a 12- gun field fortification made of earth with a 360-yard perimeter.” (p. 91)

6. Administration Building,
4800 South 3151 Street
“During the rental years, tenants or future tenants would make their way with the unerring instinct to the administration building. There they would apply for an apartment, or pay their rent before the seventh of the month – along with a $10 charge if they were late – or reserve one of the building’s rooms for a community get together, or file a complaint. … It served as a link between tenant and general manager. During the tenant occupancy years – 1943-1977 – it was a link forged by that strongest of all intangible steels: a genuine and deep affection for Fairlington by tenants and by managers.” (p. 75) Today the building is a Long & Foster Realtors office.

7. Fire Station No. 7,
3116 South Abingdon Street
“A nearby station means lower insurance premiums. The fire house has longstanding ties with the community. It is a service and a landmark no one wants to lose. It has been here since the start of the project and is part of Fairlington’s history. The start was 1943 when the station was built by the Federal Works Agency on a 42 by 82-foot site, which was to be maintained by Arlington County, at an estimated cost of $46,000. ‘Its title was vested in the Defense Homes Corporation and not in the Government.’ (Arlington County later bought the station for $3,500 in 1950).” (p.87)

8. Boundary Marker No. 4,
Route 7 near South Wakefield Street
The Constitution stipulates a district not to exceed ten miles square to become the seat of the United States government. “For 56 years Fairlington, then in Alexandria County, was included in this square. Boundary markers were set at 1-mile intervals along the border of the new federal enclave, 30 miles of which were in Virginia. (In 1789, the state consented to the cession of any land that might be required by the government.)”(p.80) “In 1846, by the desire of the inhabitants and the request of the State of Virginia, Congress retroceded the 30 square miles originally acquired from the state. That same year, the measure passed in Virginia’s legislature, with 763 votes for and 222 against. Most of the Arlington portion of Alexandria opposed retrocession. The pastures and woodlands of Fairlington were again in Virginia. The Daughters of the American Revolution had iron fences built around the markers in 1916. Their plaques read: ‘Original Federal Boundary Stone – District of Columbia – Placed 1791-1792.’” (pp. 81-82)

9. Fairlington Elementary School,
3308 South Stafford Street
“A family man, architect Kenneth Franzheim believed people in a community needed more than their homes. They needed schools as well. Arlington School Board applied for a grant (September 1942) from the Federal Works Agency and was given $190,000 for an elementary and $174,500 for a junior-senior high school in Fairlington. And Defense Homes conveyed 8.1813 acres to the county ‘for and in consideration of,. Ten(10) dollars … for public school, park, recreation and other public purposes …’ in the rental housing project (March 1943).” (p. 83) The school opened in 1944 and closed in 1979. Today the building is the Fairlington Community Center.

10. Fairlington Sale Models
On display at the Fairlington Community Center are the sale models used in the 1970s when the Fairlington property was converted from rental units to condominiums. They were used to show potential purchasers the layout of their new neighborhood. In 2010, the models were repaired and restored with the financial support of the Fairlington Historical Society and the Fairlington Citizens Association.